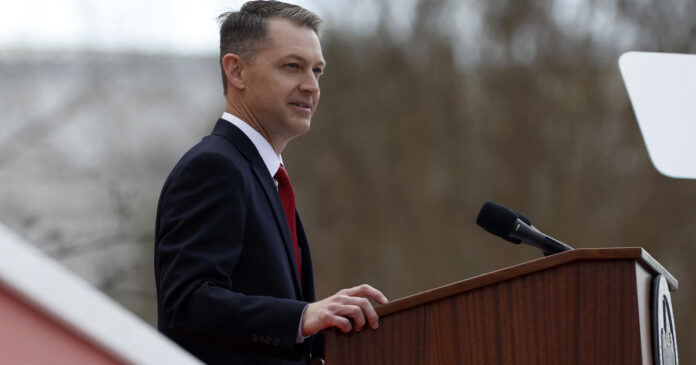 Alabama’s new secretary of state announced the state’s withdrawal Tuesday from a 32-state voter registration partnership, a data-sharing effort that was designed to maintain accurate voter rolls but has sometimes become the target of conservative ire and conspiracy theories.

A day after being sworn in, Wes Allen sent a letter to the Electronic Registration Information Center, a non-profit linking 32 states and the District of Columbia, saying the state will no longer participate in the sharing of voter registration data.

“I made a promise to the people of Alabama that ending our state’s relationship with the ERIC organization would be my first official act as Secretary of State,” Allen said in a statement. The letter said that Alabama would immediately cease transmitting data.

The Republican, who had pledged during his campaign to withdraw from ERIC, cited privacy concerns Tuesday for the decision.

“Providing the private information of Alabama citizens, including underage minors, to an out of state organization is troubling to me and to people that I heard from as I traveled the state for the last 20 months,” Allen said.

The database was created as a tool to maintain accurate voter rolls and combat fraud by allowing states to know when someone moves, dies or registers elsewhere, but has sometimes been targeted by critics.

In November, former Secretary of State John Merrill criticized Allen’s intent to withdraw. He said then that ERIC provides information that Alabama couldn’t otherwise access — such as other states’ voter registration and motorist driver’s license records — and has been a crucial tool for maintaining voting rolls.

“I trust he has evaluated this situation and is making the decision based on what he believes to be in the best interest of the state of Alabama,” Merrill said on Tuesday.

The issue of participation in ERIC was raised in at least one other state. The Republican candidate for Arizona secretary of state said during the campaign that he would withdraw from ERIC if elected, but he lost. Louisiana withdrew earlier this year.

However, another Republican campaigned on joining the partnership.

Georgia Secretary of State Brad Raffensperger, also a Republican, proudly noted in stump speeches that the state had joined ERIC. Raffensperger said in 2019 that it would be a tremendous step forward for the integrity of Georgia’s voter rolls.