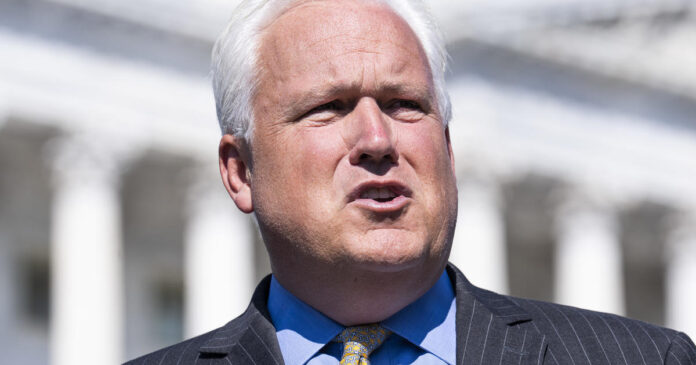 The chairman of the Conservative Political Action Conference (CPAC), Matt Schlapp, is being sued by a man who says he is a former staff member of 2022 Georgia Republican Senate nominee Herschel Walker. The man, called “John Doe” in the lawsuit, is accusing Schlapp of unwanted sexual contact that he alleged took place during the campaign. The unidentified individual’s allegations were reported by The Daily Beast news site in early January. CBS News has not confirmed the identity of the alleged staffer.

Schlapp’s attorney denied the allegations and said that the complaint is false.

The Walker staffer, who filed the lawsuit in the City of Alexandria, Va., Circuit Court, seeks over $9 million in damages resulting from the alleged sexual battery and from defamation. Doe, who says he was assigned to drive Schlapp during an Oct. 19 campaign event in Perry, Georgia, claims that at a local tavern after the event, Schlapp sat “unusually close” to him, was in “almost constant contact” with his leg and “encouraged Mr. Doe to have more drinks, despite the fact that Mr. Doe was driving,” according to the lawsuit.

In the car on the way to the hotel, the lawsuit alleges Schlapp “placed his hand on Mr. Doe’s leg” and began fondling him. Doe described feeling “mortification” and said he did not give his consent. He said Schlapp invited him to his hotel room, and he declined. The next morning, Doe said he informed Schlapp that someone else would be driving him, and that Schlapp tried to reach him by phone. Doe says he did not respond.

The lawsuit mentions no witnesses to Schlapp’s alleged behavior. Doe says in the lawsuit that late on the night of Oct. 19 and early Oct. 20, he “informed several trusted persons about what had occurred.” He also recorded a video recounting the alleged encounter.

Doe also includes text messages from Schlapp about arranging to meet and “grab a beer” after Schlapp’s dinner with a donor is over. In the morning, Doe sent a text to Schlapp saying, “I did want to say I was uncomfortable with what happened last night,” and he informed him that another driver would be available to drive him that day, according to the lawsuit. Doe says that Schlapp sent him a message asking him to call and followed up with two phone calls, all ignored by Doe.

He included a final text, allegedly from Schlapp on Oct. 20, which says, “If you could see it in your heart to call me at the end of the day, I would appreciate it.” Again, Doe did not respond, the lawsuit states.

Doe’s lawsuit accuses both Schlapps of “dishonest efforts” to “discredit” him. He said in the lawsuit that he is remaining anonymous because identifying him “poses an unusual risk of retaliatory physical or mental harm” from “a portion of the population” who admire  the Schlapps and who have “demonstrated a proclivity for threatening violence against those with whom they disagree.”

The Schlapps’ lawyer, Charlie Spies accused Doe and The Daily Beast of “working in concert…to attack and harm the Schlapp family.”

“The complaint is false and the Schlapp family is suffering unbearable pain and stress due to the false allegation from an anonymous individual,” Spies said in a statement. “No family should ever go through this and the Schlapps and their legal team are assessing counter-lawsuit options.”

In response to the original story published by The Daily Beast, CPAC released a statement, from board members Charlie Gerow and Carolyn Meadows saying they still stand behind Schlapp and they believe “this latest attempt at character assassination is false.”

The two board members also accused The Daily Beast of “attempting to sabotage CPAC events” with its reporting.