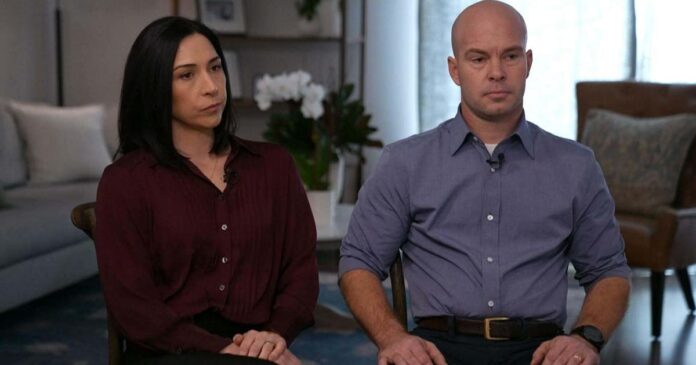 A 3-year-old girl who was recovered as a baby after being injured in a military raid in Afghanistan is now at the center of court battles in the United States as two families say they want to care for her.

An Afghan couple, now in the U.S., says they are the child’s rightful family and accuse an American Marine and his wife, who adopted the girl in Virginia, of unlawfully taking custody of her.

In an interview with CBS News, the Marine and his wife, Joshua and Stephanie Mast, deny that.

Multiple federal agencies have weighed in on the case.

The U.S. State Department said “reuniting the child with the family members in Afghanistan was the right thing to do,” while the Justice Department said the Masts’ adoption violates Virginia law, and is in conflict with the United States’ foreign policy interests.

The story of the child, known as Baby L to protect her identity, begins on the battlefield in Afghanistan in September 2019, when a counterterrorism team zeroed in on a remote compound. Baby L was roughly 2 months old at the time and was severely injured in the raid. Her parents were killed.

An unclassified military report reviewed by CBS News found the child was likely the “orphaned daughter of an AQ (Al Qaeda) foreign fighter who entered Afghanistan via Turkmenistan.”

A former Army Ranger who was on the raid spoke exclusively to CBS News on condition his identity be shielded and his voice be changed. The former Army Ranger, whom we will call David for security reasons, said he heard the baby crying amidst an intense firefight.

David said partner Afghan forces, who were also on the mission, suggested throwing the baby in a nearby river.

“They wanted me to throw the baby into the river ’cause they believed she was a terrorist,” David said.

For David, a new dad himself, that was “definitely not an option.”

The Army Rangers told CBS News they made a car seat from scraps and medical equipment. With a bandage wrapped around her head, the baby was taken to a U.S. military hospital in Afghanistan. She was treated for fractures to her leg and skull, and second-degree burns on her face and neck.

Joshua Mast, a U.S. Marine Corps lawyer who was deployed to Afghanistan at the time, wasn’t on the raid, but says he heard about the child from his boss.

“He was like, ‘What the heck are we gonna do with this baby?’ And we’re like, ‘What baby, sir?’ He’s like, ‘Oh, the operators pulled a child off an Al Qaeda objective, it was really bad,'” he recalled.

When Mast learned about the baby, he called his wife Stephanie Mast, who was in the U.S. raising the couple’s sons.

“The moment when we heard about [Baby L] for the first time, it wasn’t a difficult decision to make,” Stephanie Mast said. “It was just, there was an innocent child caught in an unfortunate situation, and we wanted to see if there was anything we could do to help, and we were able to.”

As the child was treated in a military hospital, the Masts began the process of officially adopting Baby L in the U.S.

According to court documents, the baby was eventually given to an Afghan couple, who asked to remain anonymous due to safety concerns for themselves and their families in Afghanistan. The Afghan government at the time determined the husband to be the baby’s first cousin.

CBS News has reached out to the Afghan couple for an interview over a three-month period. Their lawyers declined, most recently citing a gag order from a Virginia court that prohibits both families, and their lawyers, from talking about the case.

Joshua and Stephanie Mast spoke to CBS News two days before the gag order was issued.

How did the adoption happen?

At the heart of the controversy and confusion over Baby L are two very different accounts of how her adoption happened.

As the Taliban swept through Afghanistan in August of 2021, the Masts frantically worked to get the child out and arranged for the Afghan couple to bring Baby L to the U.S.  As Kabul fell, the Afghan couple and the baby were evacuated by U.S. forces to Ramstein Air Base in Germany, where the Masts met them at a refugee camp. At that time, Baby L was about 2 years old.

Their meeting at Ramstein Air Base was the first time the Masts and the Afghan couple met face-to-face. The Afghan woman was pregnant at the time.

According to Joshua Mast, the Afghan man “kept conveying, like, ‘My wife is attached to the child … but when she has her [own] baby, she’ll be fine.’ And then when his wife wasn’t, that’s when he changed his tune, basically.”

From Germany, the Afghan couple flew to Virginia with Baby L and then traveled to the Fort Pickett military base in the state.

A DHS spokesperson said they cannot comment on individual cases, but said that “before Afghan nationals were paroled in the United States under Operation Allies Welcome, they underwent a rigorous and multi-layered interagency screening and vetting process.”

The Afghan couple says in court filings they thought they were bringing Baby L to the U.S. for medical treatment. In a federal lawsuit, they claim the Masts encouraged them to bring the baby to the U.S. solely for medical care, but never told them they had already adopted the baby. The Afghan couple says they did not know the Masts had officially adopted the baby in the U.S. and were blindsided when the Masts took custody.

The Masts say they made it clear that Baby L would become their adopted child.

Asked if he feels he effectively communicated that he had custody of the child and was legally responsible for her in the U.S., Joshua Mast said he did.

“I mean, they used her military ID and her U.S. name and identity to get to America,” he said.

“It wasn’t just medical care,” Stephanie Mast said. “He’s like, ‘So, could she go to university?’ And we were like, ‘Absolutely.’ So it was— it— the understanding was very clear that it was a long-term commitment throughout the course of a childhood all the way to adulthood.”

Joshua Mast said the Afghan couple should have understood their intentions, “because we were explaining substantively that we have to treat her like our other children in— in a way that— to communicate the clearest we could that, ‘Hey, we’re responsible for her under U.S. law.'”

The child was transferred from the Afghan couple to the Masts at Fort Pickett in Virginia. By all accounts the encounter was fraught. The Afghan woman broke down in tears, and begged Mast not to take the child.

“I was in the car,” said Stephanie Mast. “And so the State Department representative brought her out to me. And— could hear an urgency in her voice. … I was, like, ‘Is everything OK?’ And she’s, like, ‘No. They’re getting a little emotional.’ And then Joshua came out about five minutes later. And— upset, just visibly just bothered. And he said that was the hardest thing I’ve ever had to do.”

Court records indicate the Afghan woman became depressed and suicidal after the transfer. While the Afghan couple has declined repeated interview requests from CBS News, in October the woman told The Associated Press “our hearts are broken. We have no plans for a future without her.”

In messages reviewed by CBS News, the Afghan man told an interpreter that he felt “betrayed” by Mast. The couple also claims in court documents that the Masts fraudulently obtained a passport for the child.

Stephanie Mast said allegations that her family kidnapped the child are false.

“We have been honest about who we are and our concerns over the child from the very first day,” she said.

According to court documents, the Afghan couple eventually relocated to Texas. The woman gave birth to a daughter not long after Baby L was transferred to the Masts. The Associated Press reported that “every time they buy an outfit or present for their daughter, they buy a second matching one for the child they pray will come back to them soon.”

For the last 16 months, Baby L has lived with the Masts and their four sons.

“I think the reason that we chose to speak up finally is to just to tell the real story,” Stephanie Mast said. “We’re not out to chase down all the allegations or what has been said about us, but just to share from the heart what she’s gone through, what our family has gone through, and what— why we did what we did.”

Last fall, the Taliban posted a video claiming Joshua Mast “forcefully” took Baby L. They vowed to “seriously pursue” the issue with “American authorities” so the child is “returned to her relatives.”

Mast said, “I think when the Taliban calls you out by name, and agrees with your opponents about what should happen to this little girl, that’s the point we’re gonna start fighting back.”

The U.S. State Department told CBS News that “reuniting the child with the family members in Afghanistan was the right thing to do. Our position at that time, as well as our position now, is straightforward.”

In court papers, the Justice Department also said “granting the Masts custody and adoption of (the baby) are contrary to the foreign policy interests of the United States” and the Masts’ actions were in violation of Virginia law.

Joshua Mast said he “vehemently” disagrees with a characterization in court filings where the federal government calls the custody order unlawful and improper.

“I don’t think any child should be turned over without a DNA test,” he said.

While the then-Afghan government determined the husband to be the baby’s first cousin, a Virginia judge in the adoption case recently found “there was no DNA evidence presented to show any likely family relation…” because the Afghan couple had “resisted” DNA testing.

“I think they know that they’re not biologically related,” Mast said.

As the case plays out in the courts, the Masts say their priority is keeping Baby L safe.

Stephanie Mast said the child’s future and life are at stake.

“Her everything is at stake,” Joshua Mast said. “We’re gonna continue to defend her like we would do with any of our other children.”

A Department of Defense spokesperson told CBS News: “We are aware that the child and her relatives travelled from Afghanistan to the United States in August 2021 and that a U.S. service member, Major Joshua Mast, took custody of her soon thereafter at Fort Pickett, Virginia. He is an active duty Marine Corps attorney who is serving with the U.S. Marine Forces Special Operations Command in Camp Lejeune, North Carolina since July 2020. The DoD will not comment on questions about personnel matters related to this situation.”

“The DoD cannot comment on any judicial processes that are underway regarding this situation,” the spokesperson said.

Catherine Herridge is a senior investigative correspondent for CBS News covering national security and intelligence based in Washington, D.C.