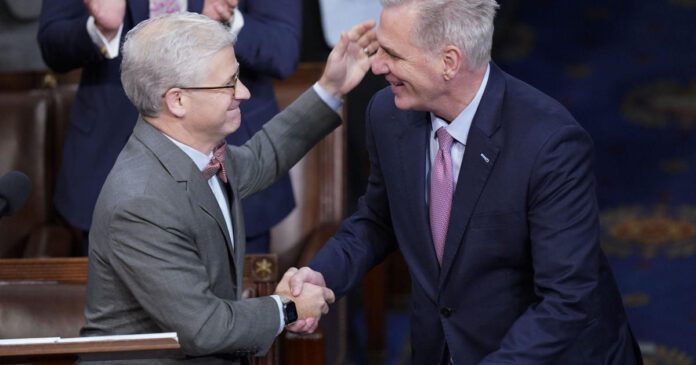 The U.S. will not default on its debt obligations this year, says GOP Congressman Patrick McHenry, chairman of the House Financial Services Committee; he is attempting to broker a deal between the White House and hardline conservatives to increase the government’s borrowing limit.

Treasury Secretary Janet Yellen wrote in a letter Thursday the U.S. had reached its congressionally imposed $31.4 trillion debt ceiling and payments to certain federal employee retirement funds would be restricted or suspended to buy time for Congress to act. Severe global economic consequences could hit in late spring if the limit is not raised.

Conservatives in Congress are seeking spending cuts to Medicare, Medicaid and Social Security in exchange for increasing the nation’s borrowing capacity. “The American people are sick of it. They want some responsibility used when it comes to spending their hard-earned money,” Republican Rep. Scott Perry of Pennsylvania told CBS News.

The White House insists Congress act without spending cuts and has so far refused to engage in negotiations.

White House spokesman Andrew Bates told CBS News, “Congressional Republicans keep issuing threat after threat to needlessly set our economy back with an unprecedented default that would cost millions of Americans their jobs and retirement funds while sinking an untold number of businesses.”

The North Carolina Republican wants to separate the debt ceiling debate from the fiscal solvency conversation, which is out of step with the right flank of his party. “My position of separating these two is not the prevailing view among House Republicans. I’m trying to advocate a ground here so we can get through the situation. I’m trying to address things as they are, not as I wish them to be,” McHenry told Major Garrett for this week’s episode of “The Takeout.”

Raising the debt ceiling, McHenry said, is “a necessary part of governing” and he would like to see both side of the debate move toward one another. McHenry is willing to accept a deal that extends the debt limit to a certain date or dollar amount.

House conservatives are emboldened by a speakership election that saw Kevin McCarthy win the gavel on the 15th ballot, after enduring a dayslong public rebuke by members of his own party.

“The goal usually in politics and in life is to suffer your indignities in private, not in public. But we did it full-scale in public as House Republicans,” said McHenry, who was integral to helping McCarthy secure the requisite votes.

Votes dragged on through the night, into the next morning. A Florida congressman asked that the chamber be adjourned for the weekend after the dramatic failure in the 14th round to elect McCarthy, who fell short by a single vote — Gaetz’s. McHenry, knowing he needed Gaetz to change his vote, complied with the request to adjourn. “When I moved to adjourn that day, that was the absolute worst feeling I had during the whole battle for the speakership,” McHenry said. “I thought at that moment that I’d basically killed my friend’s chances to be speaker of the House.”

But his feelings were short lived. The House ultimately stayed in session and on the next ballot, although Gaetz again voted “present,” what ultimately made the difference was the two other holdouts who also changed their votes to “present.” This lowered the threshold it would take to form a majority and elevated McCarthy to the top spot in the House. “It being worked out was a hell of a feeling and the biggest rollercoaster I’ve had on the House floor in the shortest amount of time.”