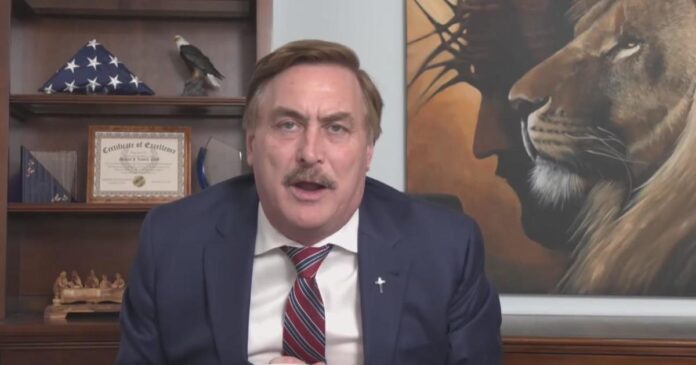 MINNEAPOLIS — MyPillow founder Mike Lindell is one of three candidates running for the most powerful position in the Republican party — the Chair of the Republican National Committee. The election is next week.

This comes as Lindell is facing a $1.3 billion defamation lawsuit over his promotion of the Big Lie — as well as the FBI’s seizure of his cell phone.

Lindell says the reason he can win is because Republicans are so divided — and, as he points out, he has a lot of supporters.

MORE: ‘I Want Them To Sue Me’: MyPillow’s Mike Lindell Says Lawsuit From Dominion Would Show Election Was Rigged

Dominion Voting Systems is suing him for defamation over his claims about their voting machines and the Big Lie.

Dominion’s lawsuit claims it’s all been good for his business and that “Lindell has increased MyPillow sales by 30-40% and continues duping people into redirecting their election-lie outrage into pillow purchases.” Lindell says that is not true.

“Now let me tell you the facts about MyPillow. When I tried to get this out to the people, MyPillow lost $100 million in retailers. We are not up 30-40% — we are down. We are down. I had to borrow money,” Lindell told WCCO.

In September, the FBI seized his phone. The search warrant affidavit says they were looking for evidence on the phone of manipulation of voting machines. Lindell says they won’t find it.

Dominion Voting Systems said in a statement that “Mike Lindell’s lies have been repeatedly debunked, including by bipartisan government officials and the courts. Dominion is moving forward with the process to hold Lindell accountable for defamation.”

Talking Points airs every Wednesday and Thursday at 6:30 p.m. and 9:30 p.m., live on CBS News Minnesota.

Esme Murphy, a reporter and Sunday morning anchor for WCCO-TV, has been a member of the WCCO-TV staff since December 1990. She is also a weekend talk show host on WCCO Radio. Born and raised in New York City, Esme ventured into reporting after graduating from Harvard University.