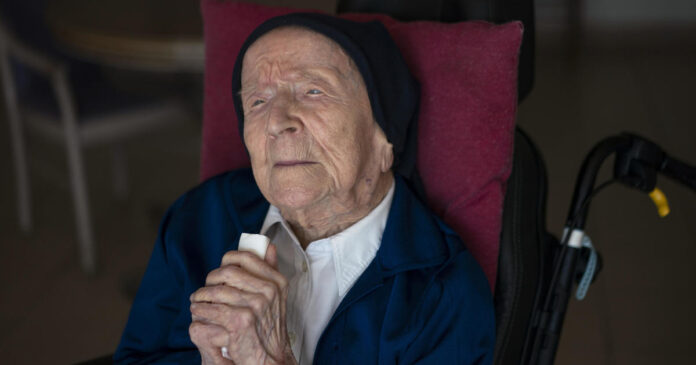 The world’s oldest known person, French nun Sister André, has died at the age of 118, her spokesperson confirmed to AFP Tuesday.

Sister André, whose real name is Lucile Randon, died in her sleep in Toulon, France, according to David Tavella with the Sainte-Catherine Laboure nursing home.

“There is great sadness, but…it was her desire to join her beloved brother,” Tavella told AFP. “For her, it’s a liberation.”

Sister André, born on Feb. 11, 1904, was believed to be the oldest living person in the world, according to Guinness World Records, which recognized her status in April 2022 after the death of 119-year-old Kane Tanaka of Japan.

The record-keeping organization announced the news as well, saying it was “saddened” to hear about the nun’s passing.

“How incredible that we shared the same air as someone who was born just a couple of months after the Wright Brothers’ first powered flight – and a few months before the New York subway system opened,” said Craig Glenday, editor-in-chief for Guinness World Records, in a statement.

Glenday added that Sister André was the “fourth oldest person ever authenticated” by Guinness.

Sister André held records for “oldest nun living” and the “oldest COVID-19 survivor,” per Guinness, as well as the second-oldest French person and the second-oldest European ever recorded. She was just three years away from earning the record of oldest person ever, which is held by France’s Jeanne Louise Calment, who lived until 122, Guinness said.

Hubert Franco, the mayor of Toulon, also confirmed Sister André’s death in statement in which he shared about his regular visits with the her. Franco said that Sister André was recognized as an honorary citizen of Toulon four years ago, and had been at the Sainte-Catherine Laboure nursing home since 2009.

Before dedicating much of her life to her religious service, Sister André spent nearly three decades working with orphans and the elderly, Guinness said. She also lived through the Spanish Flu pandemic of 1918.