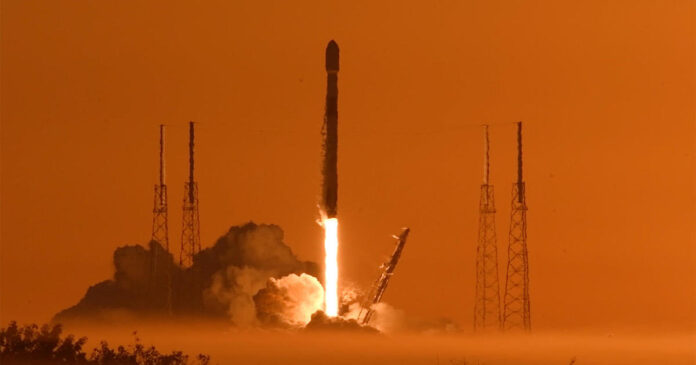 Cape Canaveral, Florida — SpaceX launched the latest in a series of more powerful Global Positioning System navigation satellites Wednesday, continuing a U.S. Space Force fleet-wide upgrade to provide improved accuracy and anti-jamming capability. A Falcon 9 rocket carrying the 9,595-pound satellite blasted off from the Cape Canaveral Space Force Station at 7:24 a.m. EST and arced away to the northeast over the Atlantic Ocean.

After dropping off its previously-flown first stage, which flew itself back for a landing on an offshore droneship, the rocket’s upper stage engine fired twice to reach the planned deploy orbit before releasing the satellite to fly on its own.

Lockheed Martin has built 10 GPS 3 satellites for the Space Force — the satellite launched Wednesday was No. 6 — and is under contract to build 22 advanced GPS 3 Follow-On navigation beacons to modernize the entire constellation with state-of-the-art components.

“We currently have four more GPS satellites in our Colorado facility that are available for launch,” said Andre Trotter, Lockheed Martin’s vice president of navigation systems.

The GPS 3 satellites are “the most powerful, resilient GPS satellite ever built,” Tonya Ladwig, a Lockheed Martin vice president, said before an earlier launch. “We provide three times greater accuracy over existing satellites in the constellation and have eight times increased anti-jamming capabilities.”

The new satellites are “a key contribution to Space Systems Command’s ongoing GPS modernization effort, bringing about new capabilities to both civilian and military users around the globe,” said Cordell DeLaPena Jr., the program executive officer.

“GPS 3 satellites increase our ability to provide military and civilian users with more robust and accurate signals that enable everyday operations such as navigation and search and rescue operations.”

The launch was SpaceX’s fourth so far this year. The fifth of some 100 planned launches is on tap Thursday, at 10:23 a.m. EST, when another Falcon 9 is scheduled to launch 51 Starlink internet satellites from Vandenberg Space Force Base in California.

Bill Harwood has been covering the U.S. space program full-time since 1984, first as Cape Canaveral bureau chief for United Press International and now as a consultant for CBS News. He covered 129 space shuttle missions, every interplanetary flight since Voyager 2’s flyby of Neptune and scores of commercial and military launches. Based at the Kennedy Space Center in Florida, Harwood is a devoted amateur astronomer and co-author of “Comm Check: The Final Flight of Shuttle Columbia.”